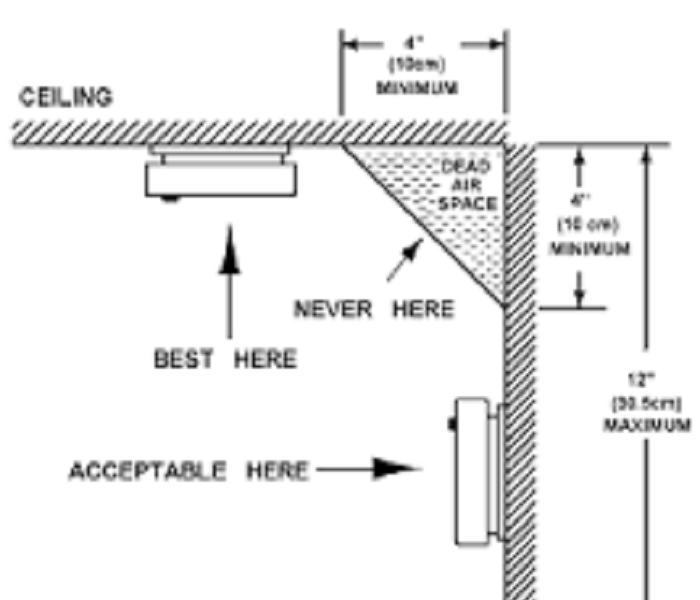 Be sure to install your smoke detectors in the best place to insure that they are effective in detecting smoke in you Columbia Gorge home.

Thanks to public safety awareness campaigns and building codes, most Columbia Gorge households have a smoke detector in their homes. Unfortunately, many homes still have an inadequate number of detectors and some of those may be mounted incorrectly. An improperly placed smoke detector can affect the devices ability to sense smoke quickly and put your home at risk of a fire.

Because modern furnishings – from appliances to bedding to carpeting- are primarily made from synthetic materials, house fires spread faster than in the past, when furnishings were from natural materials. This creates a need for more detectors throughout the home in order to give everyone time to escape. The National Fire Alarm and Signaling Code requires an alarm inside and outside of every sleeping room as well as on each floor of a home, including the basement.

Smoke detectors might also be installed in an ineffective place in a room.  When placed on a wall, it should be between 4" and 12" from the ceiling. When on a ceiling, it should be 4" from the adjoining wall, to avoid the "dead space", as seen in our graphic to the right. If you have ceilings that are pitched, install the alarm within 3 feet of the peak but not within the apex of the peak (four inches down from the peak). In a basement, the best place to install your alarm is at above the bottom step. Avoid installing near doors, air ducts and windows, as they might interfere with detection.

Most of the smoke detectors found on store shelving today have a permanent, non removable lithium battery that will last ten years. This removes the need to replace the battery when it starts beeping – or worse, the battery being removed and not replaced. Of course, the detector itself will require replacement after ten years.  When the alarm starts chirping at the end of its lifespan, that is your signal to replace it.

In our work as fire damage restoration professionals, we have seen the devastation that a house fire can cause. It's heartbreaking to see a home and all the contents that were very sentimental to those who lived there destroyed. Take the time today to check your smoke detectors and make sure that they are properly placed, that there are enough of them and that they are in working order.